Between land and sea 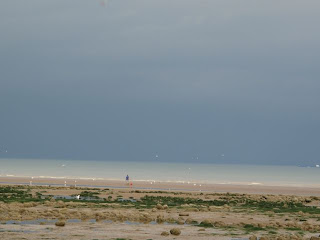 I’ve just come back from a week at the beach in Winchelsea, East Sussex. It’s an uncanny kind of place with a wide tide. At high tide, it’s an ordinary shingle beach. In the distance you can see the eerie power station at Dungeness and a huge windfarm. As the tide goes out another world is revealed that has been hidden under the water: seaweedy, muddy and strange. There’s a petrified forest under there, so as you slither through the crab-ridden rockpools, you have to be careful not to sink into oily mudholes. The mudflats pop and gurgle and skitter with life – altogether it is enchantingly different and delightful.

It set me thinking about the places between things: liminal space and where we find that in our own lives.

Liminality is an interesting idea. The clearest example of it that I can think of is The Wood Between The Worlds in the Narnia books.You can have a liminal space – such as a beach; a liminal time – such as the time between getting into bed and falling asleep or between getting engaged and getting married; a liminal person – someone on the margins of society, say an illegal immigrant or a homeless person. Anthropolologists like to talk about liminal rituals, for example the sweatlodge, where you go and spend sometime between this world and the spirit world. I think you could argue that church is a liminal space, because it’s in the centre of town but it’s focused on God.

So where’s the astrology in all this? What does liminality mean for an astrologer?

Well the first thing that comes to mind is the Void of Course Moon. This happens every couple of days. It’s the time between the Moon making its final contact to a planet and entering a new sign. Today for example, the Moon was VOC between four and eight in the morning before going into Taurus. Follow this link for a list of VOC Moons 2010. The Moon usually get the chance to have a little rest before entering the fresh energy of new sign.

Traditionally, VOC Moon is a bad time to do much, especially start something. Since, it’s only a brief period – a few hours – it’s not much to worry about unless you’re casting a horary chart. (A horary is a chart asking a specific question.) In which case, the matter in question will (generally) come to nothing.

It’s also said to be a great time to do nothing: contemplate the old navel, dust off your LPs (if you have any), and take a nap. But frankly who has time to be checking the exact status of the Moon every day. If you’re in the flow of life, you won’t need to; you’ll be slowing down and mellowing out naturally every now and then.

The poor Moon needs to gird her loins at the moment. She’ll square Venus on the 6th, then have a brief half hour VOC in Gemini, before going into her own sign of Cancer and becoming part of a massive planetary face-off in the sky. It could be as if she’s walking into someone else’s tense silence and triggering a massive row. More on this later.

There’s a lot more to say about liminality in the zodiac but I’ll leave that for another post too.

This site uses Akismet to reduce spam. Learn how your comment data is processed.